The purpose of this document is to provide a one-year history of the Laughlin American Legion Post 60.  Laughlin Post 60 was named after the town; however, there is a unique connection to the founder of the town which will be discussed later in this introduction.

As it is well known, The American Legion was formed by a group of twenty officers who responded to a request from the headquarters of the American Expeditionary forces (A.E.F.) to suggest ideas of improving troop morale.  This request led to the formation of a temporary committee in February, 1919; the Paris Caucus in March, 1919; the St. Louis, Missouri caucus in May, 1919 and the ultimate national charter by Congress on September 16, 1919.  The Department of Nevada was formed in the same year and was commanded by James Graves Scrugham from the Darrell Dunkle Post 1. The establishment of Laughlin Post 60 did not come until 66 years later. The primary reason for this time span was directly related to the growth of Laughlin, NV. A point worthy of note about The American Legion is that it is an organization of War Veterans.  Consequently, if one did not serve during periods considered “war years” then membership to The American Legion is disallowed. These war periods are set by Congress

Although there is evidence that the Patayan Indians inhabited the area around 900AD, the real history of Laughlin started with the building of Davis Dam.  Completed in 1953 Davis Dam is 2 miles north of the unincorporated town of Laughlin and 90 miles south of Las Vegas. The dam was originally constructed for flood control and regulating the flow of water; however, a major side benefit is power generation.  Today its turbines are capable of generating 48,000 kilowatts of power. Another side benefit was the creation of Lake Mojave, a reservoir capable of storing 1.8 million acre-feet of water which plays an important part in the economy of Laughlin as a major western destination for “Summer Fun”.

Laughlin, originally known as South Pointe, came into existence during the construction of the dam.  At that time it consisted of a small motel and bar. This bar closed at the completion of the dam.

In 1964 Mr. Don Laughlin purchased the motel and within two years it became known as the Riverside Resort.  The resort had guest accommodations in four of its eight rooms, a dining area, 12 slot machines and two gaming tables.  It was also during this time period that Laughlin got its name. A U.S Postal Services inspector insisted that the town have a name in order to receive mail.  He arbitrarily named it Laughlin after Mr. Laughlin.

Although there was some growth in the 70s, it was not until the 80s that the town really started to flourish and gain additional Casinos and people.  With people came the opportunity to establish an American Legion Post. On 3 March, 1985 Laughlin Post 60 received its temporary charter. On 2 July, 1985 a Permanent charter was issued by then National Commander, Clarence M. Bacon and National Adjutant, xxxx.  This charter was countersigned by the Nevada Department Commander, Orin Huxsy. There were 74 Charter members. The first commander of Laughlin Post 60 was Frank Mason. The adjutant was Ernest E. McAvan.  Mr. Laughlin played a significant role in the existence of Post 60.  Because of his benevolence Post 60 was provided a place for meetings and other post functions. Mr. Laughlin, although not a veteran, continues to play a role in the activities of Post 60.

The 90s were a pivotal period in the history of Post 60.  It was during this period that activities were initiated to establish a post home, purchase land from the Bureau of Land Management (BLM), get its Non-Profit status and initiate the construction activities of the post home.  Significant events include:

−    In 1993 Post 60 made an application to the BLM for land to construct a permanent structure as a post home.  Part of the request included plans for the development of the land. In 1996 a 5-year lease was issued to Post 60 for 5 acres of BLM land.  This lease had an option to purchase the land. In 2000, Post 60 executed this option and BLM provided Patient 27-2000-0090 to Laughlin American Legion Post 60

−    In 1994 Post 60 submitted and received from the State of Nevada its Non-Profit Articles of Incorporation.

−    In 1999 Post 60 initiated its building activities under the leadership of Commander Richard Springston.  It was during this year that the post floated a loan for $750,000. An extraordinary facet of this loan was the requirement to make a $250,000 deposit.  In order to meet this need Post 60 offered Promissory Notes in increments of $5,000 to members of the post. In total $255,000 was acquired and the loan was granted.  Post Commander, Richard Springston, a licensed contractor in California secured a contractor’s license in Nevada and became the General Contractor for the construction of the Post Home.  The Post Home earned its Certificate of Occupancy on 3/3/2000.

Today the Post Home is fully operational and operates on a 24/7 schedule.  It is the only post within Nevada that operates on this schedule. Not only does the Post Home support Post 60 functions, it also supports numerous fraternal, civic and government organizations by providing meeting facilities and kitchen facilities for fundraisers.  The Post Home is located at 1510 Bruce Woodbury Drive, Laughlin, NV. 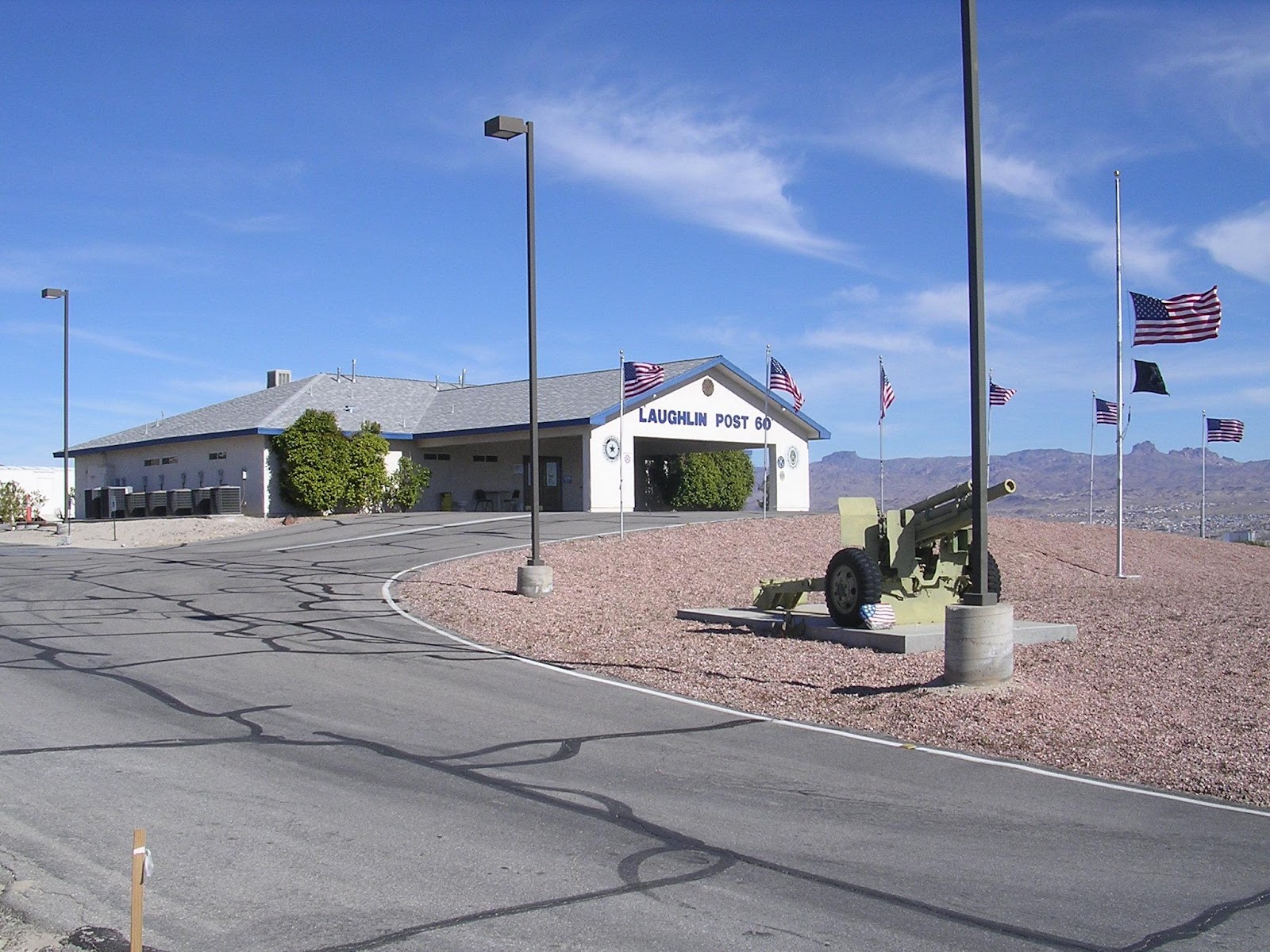